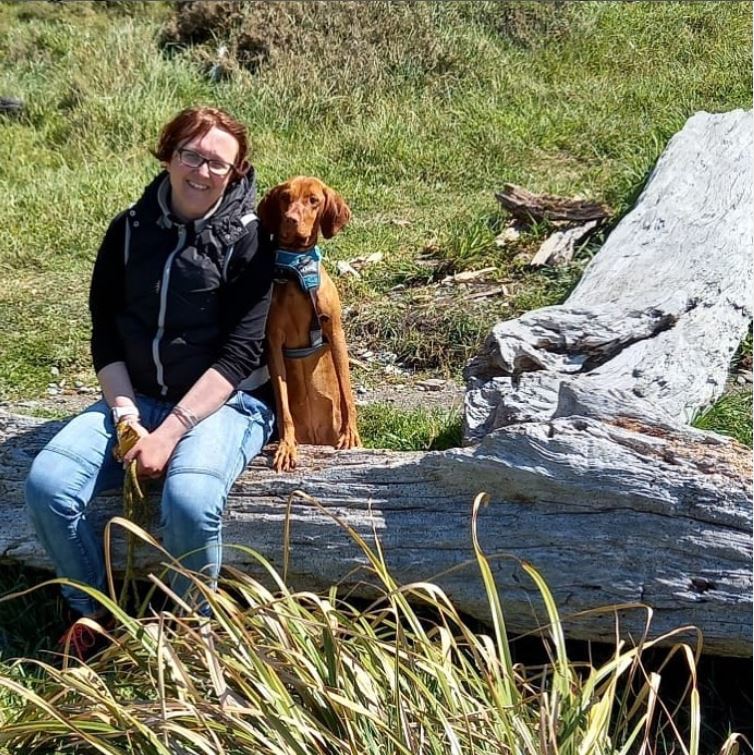 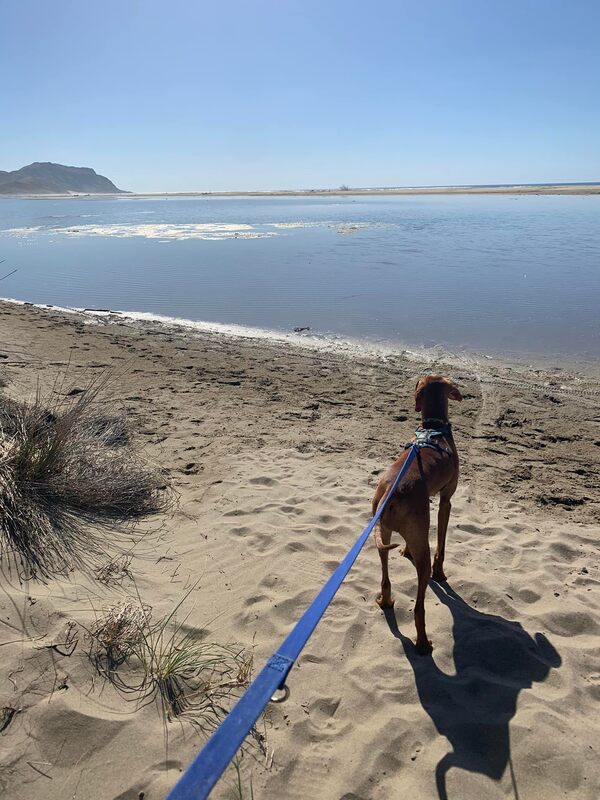 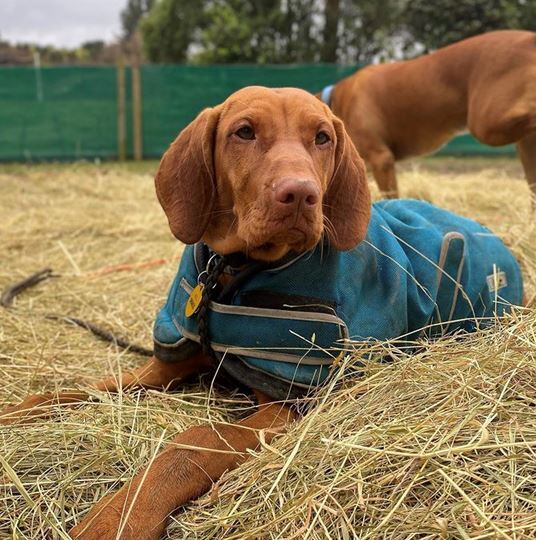 I am so stoked to welcome Helen and her family to the Wuff Wuff Club.

We live in Ōtautahi and are lucky to share our home and life with our animals. I have always been a big animal lover and was lucky to be indulged with my love of animals, even when younger.

My 2 children (ages 8 and 6) have both seemed to inherited by love of animals and dogs (which is good, cos I'm not sure how it would work out if they didn't!). One of our favourite activities as a whanau is taking the dogs for walks and adventures to different places around the local area. We have hunted for crabs under rocks while the dogs are swimming and followed them through trees as they follow their noses -  its a fun way to spend an afternoon.

4 years ago. when we faced the huge heart-breaking bereavement of losing my husband and the kid’s Dad, it was our animals which helped comfort us and still bring little sparks of joy at a very bleak time. Dogs don't care who you are or what you do, they remind us to live in the moment and enjoy the fun things in life, which is a pretty good thing to remember from time to time.

How did you come into each other’s lives? Poppy: A very long time ago, before children and husbands, I used to foster dogs for a rehoming organisation. Poppy was delivered to me to foster, and the moment I laid eyes on her, I knew I was going to keep her. She was tiny, scared of everything and you could almost count all of the bones along her back.

Albert: Albert was advertised on behalf of a small regional council on the local dog watch page. His photo made him look small and quite reserved -  he was down to his last days in the pound before he would have to be put to sleep. When we turned up, he was large and not very reserved at all! But then he sat on my feet and looked up at me and I couldn't leave without taking him home.

Kevin: I'm still not sure - The kids and I went on holiday, in the countryside and ended up leaving with a deposit paid on a puppy. Don't let your children look at the cute new born puppies the nice lady has.

We stayed on a farm, which was run by lovely hosts, who also happened to breed miniature schnauzers. We fell in love with Kevin's Dad, who would come and get pats and hang out in the cottage we were staying in.

How did you decide on your dog’s names? Poppy had been named Pixie by the rehoming organisation on her paperwork for the vet, but she just didn't seem like a 'pixie' to me, and Poppy came to mind when I looked at her sweet little face.

Albert - He was named by my daughter who was then aged 3. She wanted to call him Chase (from Paw Patrol) but I said I didn't think he looked like Chase, and then she said Albert! I have no idea where she got that from, but it suits him. He is most certainly no Albert Einstein!

Kevin - Since we had a 'people' name trend, we had to keep it going. Kevin had a big dark 'moustache' type beard marking when he was a tiny puppy, so we decided he needed the type of name that a guy with a big moustache would have.

What are they like? They have very distinct personalities, which complement each other and contribute to them generally being pretty well behaved (mostly).

Poppy is very much an old lady now at 13, she loves going for car rides, gentle walks and sleeping in nice soft places. When she was younger, she was incredibly athletic and playful, with a big sense of fun and love for her people, she is the most well-trained of my dogs (before kids life! ha) and has always just wanted to please. She is incredibly affectionate and a true staffy with her devotion to me. She is a very special girl, who has been with me through a lot of life changes and moving around the South Island.

Albert - Where do we start with Albert? Albert has his own hashtag, which is #f*ckingalbert, he has managed to get himself into some very interesting situations - like eating garden waste (which almost poisoned him to death) and breaking his leg while being on a lead with a dog walker. He will eat first, ask questions later and destroy any type of courier package that's left hanging out of the mailbox or biffed over the gate.

He has an abundance of energy and enthusiasm for life, people and playing in water. Unfortunately, people don't always appreciate his general enthusiasm for being licked by a large 32kg dog of indiscriminate breeding. However, he is the most loving and sweet dog, who cries when Kevin gets too enthusiastic with playing and hanging off his face.

He has cured previous non dog lovers of their dog aversions (especially big 'bull breed' types) and checks on my kids every night before he goes to bed. Despite the abundance of energy and lack of apparent thinking skills, he is actually a gem to take to the dog park, walk off lead and so friendly when meeting new people.

Kevin - Kevin has an unrivalled sense of entitlement and I put that down to the fact that he has never experienced a day of adversity in his life. He's never faced the cold floor of the local pound or had to walk the streets wondering where his next meal is. He went from the comforts of his breeder to the comforts of his new family. He absolutely adores the kids and gets quite sad if they happen to be away for longer than a couple of nights, which results in him going to their bedrooms and pulling out their stuffed toys, to lie with them forlornly. Kev is always up for a game of 'vets' or 'dog groomers' with them, but his favourite game is playing chase with the cat up and down the hallway at 4am in the morning.

He is constantly adored by all people when out and about, which only causes to increase his general sense of entitlement about his place in the world.

He can usually be found hanging off Alberts ears, when they play, which results in the 10kg dog, making the 32kg dog lay down and start crying.  In a classic case of smallest with the largest voice, he is often the only dog that will still bark at people once you have let them inside the gate, while the other two 'tough' dogs are already making friends.

What makes them the goodest girl and boys? Poppy is very special to me, she is the sweetest old girl and I feel very privileged to have all these years with her. She knows when I'm sad or not very well and just comes and snuggles up next to me, just letting me know she is there. With both of my children, just before I gave birth, she was my absolute shadow, following me around everywhere and not letting me out of her sight.

Albert is just a big lovable doofus, he is a lot of fun to take on adventures. You can tell he doesn't think about much, just how much he loves life and being in the moment. He always looks happy (even when he has done something stupid).

Kevin is quite hilarious, he just slotted into our life so easily and its great to have a dog who is small enough for the kids to confidently handle and lead (and enjoys it, too). He is very sweet and affectionate, he loves a cuddle.

What is their favourite walk? They all love a good off lead run and adventure in the redzone or down at the Waimakariri river, rolling in anything that smells is also a great time.

Do they have a favourite toy? Toys don't last too long at our place! A trusty tennis ball is always appreciated. Often sticks end up coming home as they can't be parted with.

What is their favouritest thing to do? Eating, sleeping on someone's bed or going in the car!

Where do they sleep? On my bed - yes all of them. 3 dogs and 1 cat, every single night.

What are their most loved noms? Dear old Pops has gotten quite fussy in her old age, compared to when she was younger. She will never say no to a McDonalds ice cream, which is an occasional treat on a hot summers day.
Albert will eat absolutely anything - even things that are not supposed to be eaten or ever been considered to be eaten by any kind of mammal before. I happen to know some children, who find this very convenient at dinner time, when they happen to be served their least favourite vegetables.

Kevin, with his true sense of entitlement will only eat what he deems worthy enough. This includes when nice people in pet shops try and give him dog treats and he drops it on the ground and looks at them with distain, because it doesn't meet his standards. He is very fond of marmite on toast (but only with butter, not margarine).

Have they had any transgressions? I think these are too numerous to mention! But I have been told that this is considered slanderous against their good names.

I once had a very expensive handbag, which a very young Poppy dog decided would make a great chew toy. She also used to be a bit of a sneaky escape artist in her younger years if she really wanted to see something. A very long time ago, she to get over the fence to play with a neighbours dog, I didn't know about this for weeks and weeks. They thought it was funny and would just lift her back over the fence when they came home from work!

Albert has a rap sheet as long as Ned Kelly's. As well as the broken legs and poisonings, there are incidents which resulted in a broken window and a rather memorable escape attempt to try follow us, as we walked to school one morning.

Kevin is disappointed that no one has found a solution to his occasional aversion of doing his ablutions outside in the wintertime, when it is raining hard and the grass is very wet.

What does your pup do when you go to work or out? When we go out, they generally stay at home, with access to their kennels. If its somewhere dog friendly, I will generally take one with us, leaving the other 2 at home with each other for company.
Poppy is very lucky that she now gets to come to work with me each day and hang out in the office. This is due to her having arthritis and struggling with temp changes. She is also very quiet and well behaved, she happily sleeps in her bed under my desk, with a short walk at lunch time.
​
However - no-one in the office cares about me anymore - only Poppy.​
Return to main page